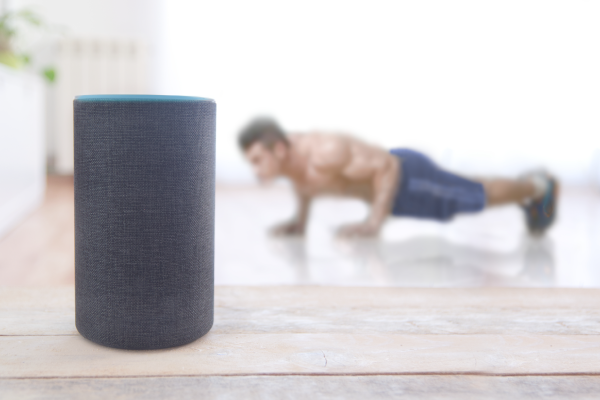 With over a million retailers online, it can be hard to make your voice heard as a brand. Copper Compression, a seller of athletic performance and recovery products, wanted to stand out and lock in a competitive advantage by adding voice purchasing services to their offerings. Here’s how they did it with Blutag.

The Challenge: Cornering an Emerging Market

Right now, about one-third of all Americans own a dedicated voice assistant such as a smart speaker. Of those, 50% have made a purchase with their voice assistant. It follows that around one in six consumers has used their smart speaker to make a purchase—which is a staggering figure when you consider how recently those devices came into vogue. At current growth rates, it won’t be long before most US consumers regularly use voice to make purchases, which means that now is the time to set up voice purchasing for your business.

Matthew Mangione, the Advertising and Operations Manager at Copper Compression, saw the writing on the wall. Even though he hadn't personally used his voice assistant to make a purchase before being introduced to Blutag, he was convinced that retailers with voice capabilities would dominate the next five years and that early adopters would enjoy key first-mover advantages.

One big obstacle for Copper Compression was that ordering a knee brace isn’t like ordering groceries. Groceries are a very popular item for voice ordering because once you know what a bag of oranges looks like, for example, you can go ahead and order one sight unseen—you know exactly what you’ll get. How do you get enough information to confidently order an athletic compression tool without necessarily seeing it?

With the constraints above in mind, it was clear that both overinvesting and underinvesting in voice could entail pitfalls. If they invested too much too soon, it could frustrate customers by providing tools that they didn’t know how to take advantage of. Investing too little too late would mean getting crowded out by more daring competitors. Where was the middle ground?

Blutag provided simple advice that turned out to be very successful: start small and expand. The first implementation of voice with Copper Compression didn’t involve any form of ordering at all. Instead, a simple Alexa skill allowed customers to track their order from Copper Compression using voice—that was it. The next step was to give those customers—who had already ordered using their desktop or mobile browser—the ability to reorder their equipment using voice.

The next step was to offer deeper integration with Copper Compression’s existing marketing efforts. For example, the company already employed former New Orleans Saints quarterback Drew Brees as their spokesman. They were able to extend their brand into their new voice channel by having Drew Brees say a recorded greeting to new customers using Amazon devices. They even had the former quarterback record a special Mother’s Day message for their consumers.

Finally, Copper Compression was able to use Blutag in conjunction with Amazon’s Fire TV devices. These devices can see what you’re watching and display ads accordingly. For example, someone who’s watching sports commentary is likely to be an athlete, and athletes often need athletic recovery products. So, Fire TV can see that you’re watching a sports-related program and display an ad that offers you more information on athletic recovery products. The consumer can use the voice-enabled device to respond to the ad, and then Drew Brees is on their screen.

The Result: Building a Foundation for a Voice-Centric Future

As the future unfolds, Copper Compression builds voice into more places—voice advertising, Google AdWords, eSports advertising, OTT media, and more. “At some point, voice will be the first contact for all of that,” says Matthew. “I can see when the iceberg flips over; it's going to at some point. I want to be well-prepared for when it does do that because my feeling is that things are going to float through voice instead of with voice on the side.”

Here at Blutag, we pride ourselves on our ability to enable retailers to deliver voice apps to their customers in just a few simple steps—no code required. This helps companies at every level of business—from small businesses to ecommerce giants—to prepare themselves for a voice-first future.

For more information about what we can offer you organization and how you can delight your customers with convenience, download our ebook, The Rise of Voice Commerce Within the Retail Industry.

Tags: Voice Shopping
Back to Blog

If you're a parent, then you already know. If you're not, imagine that you're juggling a couple...
Read More

Voice-Based Shopping on the Rise in the Grocery Industry

A trip to your local grocery store can quickly turn into a lengthy ordeal. And in the past year,...
Read More

In a crowded niche, Copper Compression is offering something different – recovery apparel that...
Read More